In Writing Analytically,  David Rosenwasser and Jill Stephen offer us a second example of tracking the evolution of a thesis, but this one tracked through a draft of an essay, but through its final version. Here’s what they have to say:

We offer the following student paper as an example of how you might go about tracking the evolution of a central claim. As you will see, the writer repeatedly tests the paper’s working hypothesis against evidence and arrives at an interestingly qualified version of his original claim. We have offered in square brackets brief comments on the development of the writer’s thinking. 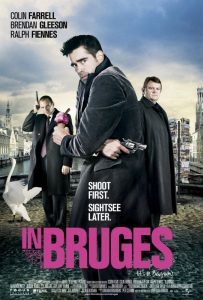 In Bruges: Finding Hope in the Presence of the Past

In Bruges, a film by Academy-Award winning director, playwright, and Irishman Matin McDonagh, is obsessed with a sense of place. The city of Bruges, with its many old churches and old art (including a Bosch painting of the Last Judgment), seems to stand in the film for two starkly opposed ideas. One is that we can never escape our own histories—sequences of events that, once set in motion, can’t and should not be stopped, and can’t be changed. The other idea is that we can and must hold out for the possibility for change, for a future that past actions and rigid systems of value haven’t already set in stone. Given the film’s violence, dark comedy, and apocalyptic ending, it seems to offer only faint hope for change in the face of relentless cycles of determinism and fate. [The writer puts two conflicting interpretations in tension with each other and posits a working thesis that there is only faint hope for change.]

In the film, hitmen Ray and Ken have been sent by their boss Harry to hide out in the Belgian city of Bruges after a job has gone horribly wrong because Ray has accidentally killed a child. While in Bruges, Ray falls in love with Chloe, a Belgian drug dealer, on a film set. At the same time, Ken and Ray develop a strong bond while discussing Ray’s suicidal feelings of guilt.

The story on some level is all about the fact that it takes place “in Bruges,” a medieval city that embodies the presence of the past. The presence of the past is the idea that history is living and shaping the present—that it is not dead or absent but very much present and alive, actively controlling what people do. [The writer begins to demonstrate that one side of the opposition gets considerable weight in the film.] We can see that the past is alive in the many examples of tourists visiting the city’s architecture and in the repeated discussions Ken and Ray have about the tourist sites. As we also learn, Bruges is the crucial fairy-tale site of Harry’s happy childhood. This is why it is the setting for the story in the first place: because Harry, who romanticizes the past, wants to give Ray one fairly-tale experience before ordering his death.

When we think about the film’s point of view on Bruges, we find that Ken (and the cinematographer for the film) loves it while Ray hates it. This conflict defines the relationship between Ken and Ray that develops throughout the film, with Ray holding onto the present and Ken holding onto the past. The city and relationship between the characters are intimately intertwined. [Here the writer makes overt the two main characters’ positions in tension between closed past and future possibility.]

It is crucial to know that Harry is set on killing Ray because Harry operates on a system of ethics and justice that operates on “honor.” In this system, Ray can only pay for his sin of killing a child by dying himself. This comes into conflict with Ken and his system of justice/ethics when Ken refuses to kill Ray because he believes that Ray “has the capacity to change [and] do something decent with his life.” Ken’s system of ethics operates on an idea of choice, hope for personal change, and a future that is not already set in stone. In this way, it comes head to head with Harry’s “honor” principles in the film. If we can read Ken as the most overtly religious character in the film, given his affinity for sightseeing Catholic churches and medieval Catholic art, we can then see Ken and Harry’s conflict as one of a religious “spirit of the law” versus an honor-driven “letter of the law.” [Here the writer offers another version of the binary that is central to his interpretation.]

Ray’s guilt and the discussions it brings about in turn connect us back to Bruges as a symbolic location. Given that these churches are specifically identified as Catholic, we can link them back to a consistent theme of guilt, death, sin, and judgment. Churches are, after all, not tourist sites in the same way that something like the Empire State Building or the Statue of Liberty are. Churches imply a sense of pilgrimage for the characters—that they are going on a religious journey ending in enlightenment. The churches are refuges for Ken. They offer alternatives to a present that for Ken seems out of control and immoral.

When Ken receives orders from Harry to kill Ray, he is unwilling to obey, choosing instead to confront Harry. Harry in turn comes to Bruges to kill Ken for not killing Ray. The resulting showdown leads to Ken sacrificing his life to save Ray, Harry killing himself because of his own unyielding code of honor-driven ethics, and Ray being severely wounded as he is put on oxygen in an ambulance, left with the hope of a new life and potential change.

In this conclusion, the film is fairly clear that Ken wins the ethics battle I’ve just laid out. Even though Ken dies, he does so by staying true to his code of ethics, in which preserving the potential for life and change is more important than rigid codes of honor. Harry’s code of ethics also leads him to his death but in a much more ironic way. when he is pursuing Ray in the final moments of the film, Harry accidentally kills Jimmy, a dwarf on the film set. When this happens, Harry thinks that he has killed a child in much the same way that Ray had in the opening scene, and he immediately kills himself, explaining “You’ve got to stick to your principles,” before he blows his own head completely off.

This brings us to a way to interpret the ending of the film, which I think is actually quite hopeful in a situation without much hope. At the end of the film most of the main characters are dead, and Ray is being carried into an ambulance with three or four bullet wounds in his torso. One school of thought could say that the fact that the film ends with Ray’s voiceover saying “I really hoped I wouldn’t die” points to an interpretation that he dies and his ghost is narrating the story to us via voiceover. This interpretation seems a little bleak, however. After all, what good is Ken’s sacrifice of his life if Ray dies almost immediately afterwards? [Here the writer finds some evidence for his initial point that there is only faint hope in the film.]

On this note, I would like to instead point to Ken’s victory over Harry as a signpost for hope at the end of the film. If the film endorses Ken’s viewpoint that Ray’s undetermined future and possibility for change are worth dying for, the film must be holding out Ray’s survival as a hopeful way of escaping the presence of the past.

In the last few moments of Ray’s voiceover, as he’s wheeled on a gurney towards the ambulance, he talks about how Bruges must be Hell.  In this version of Hell, the past creates a vicious cycle in which we become trapped in our own histories, our own primal sins that we can never escape or gain forgiveness from. In In Bruges, however, Ray’s primal sin of killing the child is ironically and finally reenacted by Harry, the person who is rendering justice for that very sin. [The writer sees that Harry’s choice to die by his own relentless code for what we see as a mistake starts to erode the film’s support for the position that Harry represents.]

Finally, it is significant that the last scene of In Bruges takes place on a film set—the film set of a Belgian dream sequence that describes and alludes to the Last Judgment, the end of time in which all humanity will be judged by God. This makes sense, given the references to the medieval painter Bosch and his painting “The Last Judgment,” which is showcased and discussed earlier in the film in relation to Ray’s guilt and anxiety. The last judgment or final say of the film happens when the painting of “The Last Judgment” comes to life in the form of the film actors, who are dressed in costumes taken from Bosch’s painting. [Here the writer sees that the idea of final judgments is being presented quasi-comically as a fiction, something that takes place on a fantasy film set.]

With all of this in mind, we come back to Ray’s last line, “I really hoped I wouldn’t die.” This line remains unresolved by the film, in the sense that we almost expect Ray to say “And I didn’t,” or “But I did.” The fact that this line remains unresolved makes its meaning open for interpretation and not predetermined, and thus a match for Ken’s code of ethics. Lastly, even though Ray’s line, “I really hoped I wouldn’t die,” ends on the word “die,” it is more important that we look at the main verb of this sentences: “hope.” This breakdown of the sentence is modeling on a smaller scale what the film is trying to say: that in the end, “hope” in the face of “dying” is all we can cling to and count on. In this way, we can view the ending of the film as offering hope for change and belief in potential—a breaking of old irreconcilable cycles of sin and punishment. This hope the films posits as necessary because without it we are help inescapably hostage to a cyclical repetition of our own histories and past deeds. [The writer has arrived at an evolved version of his opening claim about hope, which he now sees as less faint than it had initially appeared.]