Argument Should Be Welcomed, Not Feared

When many Americans hear the word argument they  immediately think of an unpleasant exchange punctuated by anger and hostility. They may feel similarly about events like disagreement, controversy or debate. Yet, each of these types of social interactions lies at the core of intellectual and academic life, where nearly all knowledge–however stable–can be contested or called into question, disputed, or disagreed with as a scholar invents a new approach, or recalculates findings, or presses for an alternative interpretation. Protagoras, the ancient philosopher, believed that humans were the measure of all things, and because humans, by nature, see things in differing ways, employing multiple perspectives and points of view, differences in meaning, interpretation, and therefore what counts as best, most correct, or most truthful may vary according to who, where, and when someone is making a determination. In order to move our collective understandings of worldly phenomena forward, we together argue for (and can agree, at least for the moment) what is most correct, most truthful, most prudent, most ethical, etc. Democratic life itself depends on taking multiple and conflicting views into account.  Deliberation names the activity of making collective decisions about the most prudent action to take or the best way forward. A level of fairness is achieved when each citizen involved in a controversy is listened to carefully by others, who, though they may not fully agree with an alternative claim, come to understand its genesis and appreciate its standing as another way of thinking.

Intellectual arguments aren’t about swapping opinions. Nor are they battlegrounds were a victor emerges and a vanquished retreats into oblivion. Though disagreements in the political sphere often are filled with bluster, bullying, or bargaining, in the intellectual sphere, arguments are made through the consideration of evidence, linked to claims by reasons. In its basic form, reasoning is a process of questioning and response that considers, at one time or another, logic, experiences, or emotional responses in order to explain how one arrives at a position.  In academic life, arguments happen everywhere and often: in laboratories, in archives, in seminars, and in classrooms. One expects that all positions and every finding will be supported by qualitative, quantitative, experiential, and textual evidence.

This is not to imply that academic arguments always proceed quietly and without personal commitment. Intellectual arguments, like arguments in civic life, can be heated and sharp. Sometimes they are brief and exigent; at other times, they extend over generations. They can be robust, detailed, and richly involving; they can also be exclusive, disaffecting, or agonistic. Commonly, we refer to arguments as weak or strong, good or bad. But they cannot be avoided completely. We suggest that even though you may not wish to enter all disagreements with your own arguments, that you embrace the practice generally, that you while you are in College you fashion yourself as someone who listens to and makes arguments, both verbal and written. We offer here some suggestions for what good argument entails, and help you to embrace intellectual disagreement as a knowable and worthwhile activity.

The Intellectual Sphere is a Sphere of Argument

All of us overhear or enter into disagreements daily. Regularly we decide among competing alternatives; we “take sides” in games and strategize how to win; we find ourselves attracted to one political figure or another. Although such quotidian decisions and allegiances hold importance, they typically do not depend on the more explicit calculations, evidence-seeking, and reasoning upon which academic arguments rely. In intellectual spheres, being persuaded to accept a claim rarely happens because one feels somehow “moved” to do so.  Instead, the process of inventing, structuring, and distributing arguments is often labor-intensive, supremely conscious, and–importantly–requires multiple iterations and revisions. Sometimes, for good reasons, intellectual writers change the nature of their claims in the midst of constructing an argument. The process of designing an argument from scratch is a process of learning, as one maps the territory of a dispute and listens carefully to previous claims and positions, takes new evidence into account, and discovers novel modes of research.  If you are like many of us, it is at times tempting to accept (rather uncritically) the last thing we’ve heard or the most recent thing we’re read. It’s surprisingly easy to foreclose alternative avenues of thinking in favor of finality. Indeterminacy and ambiguity can at times seem tiresome or troublesome. We wish to move on, and so we permit premature closure in order to be finished with the deliberation.

But when we do so we shortchange other thinkers and short-circuit the process of fair and robust consideration of alternatives. To prevent this, most disciplines prefer that your paper includes non-tendentious summaries of previous research and alternative findings.  That summary captures the gist of the controversy as it has unfolded in the past, identifying key players, describing the contrasting claims, mapping the “territory” of the disagreement in some detail.  Such a review of the literature signals to others that you have “done your homework.” But it also enhances your ethos (that is, makes you seem a person of good character) as someone who is fair and considerate of others and embraces a democratic sensibility.

Much of your academic performance in college will be judged by the quality or your arguments. Notice that we did not say that you would be judged ultimately by how successfully your persuade others of your claim’s value, but rather how well you explain your position or how thoughtfully you demonstrate how you arrive at your finding.  The key word that professors tend to listen for is the simple word because: “I say X because I analyze the evidence in Z fashion.” In college writing, it is inadequate to make simple pronouncements, to declare something out of hand.  Instead, you will need to show your readers the chain of reasoning that led to your conclusion.  It is quite possible that you may reach a conclusion that differs (either slightly or substantively) from a finding others have reached.  As long as you can articulate the because part of your argument by referring to evidence and reasons, you will have met the fundamental expectation of arguing in college.

Most written arguments that you fashion in your Davidson courses will include five parts: a claim, reasons in support of that claim, evidence upon which those reasons rest, assumptions and core principles (called warrants) upon which your claims and reasons hold true, and acknowledgment of alternative claims that have been or may be made. Assembled together, those parts interact like this: 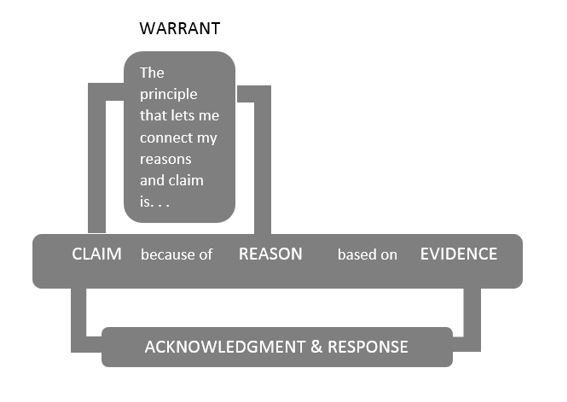 Claims offer solution to intellectual problems. They suggest to readers that they ought to change the way they think of act in regard to the problem at hand.  Because a claim is nearly always contestable, to be accepted it must be based on reasons. When a reader asks, “What do you think about X?” you offer a claim. A “thesis” is essentially the same thing as a claim.

Reasons provide the basis for making your claim. Reasoning may be fashioned from logic, experience, emotions, or ethical values. When a reader asks, “Why do you think X?” you offer reasons, which a drawn from evidence.

Evidence provides the basis for your reasons. Evidence is composed of facts, data, exact language, or other observable elements that you assemble, analyze, or interpret in particular ways in order to point to reasons. When the reader asks, “How do you know X?” you answer by citing evidence.

Warrants are the assumptions and principles upon which your reasoning rests. A warrant is often a fundamental assumption about the phenomenon you’re scrutinizing, a value shared by members of a culture, or a principle drawn from common experience. Often, warrants aren’t made explicit because the reader realizes that the members of his/her audience will automatically accept them as normative.

An argument that does not respond to others’ claims, alternative interpretations, or contrasting findings runs the risk of appearing uninformed and incomplete. The least a writer can do is acknowledge that contrasting claims exists, but other writers will go farther by reckoning with counter-claims or rebutting counter-analyses and counter-interpretations.

Take this example of a simple argument. Imagine that you wake up one morning, look out the window, and make this finding:

The streets are wet. It must have rained last night.

But underneath that simple argument of evidence (The streets are wet) and claim (It must have rained last night) lies a warrant (When I see wet streets, I typically assume that it has rained) that has catalyzed the claim. In this case, the warrant is called a warrant of typicality since the assumption conforms to frequent experience. But perhaps this is an atypical day. Perhaps the street cleaners recently came by, or maybe a fire hydrant has burst, or those noisy neighbors staged another water balloon fight. These alternative explanations might well displace the normative assumption about rain and lead you to a different conclusion. If you were to construct a complete argument, you would at least acknowledge these alternative claims (call counter-claims), or refute them.

Take another simple argument, this one a bit more complex:

The Winter Olympics should be held every two years [claim] so aging athletes have more chances to compete [reason]. A study conducted in 1999 by the Organization of Olympic Athletes shows that many athletes peak during non-Olympic years and, as a result of aging, can no longer compete when the games re-open. [evidence] By including older athletes, the Olympics promotes inclusivity and continuity, two useful values for any organization. [warrant] Up and coming athletes may worry that a team may lose the competitive edge that newer athletes provide, but a more regular Olympics doesn’t promote staleness. More frequent games increase the opportunities for everyone. [response to objection]

Initially, trigger warnings were created to prevent students from re-experiencing severe trauma from their own lives when troublesome events were described or depicted in class.  First recommended by the psychiatric community, trigger warnings were designed to forestall PTSD-like symptoms. Clearly, the original impetus for trigger warnings was reasonable as a medical accommodation. [response] Soon, however, trigger warnings were offered to prevent any sorts of psychological discomfort, regardless of severity. This dilution of original purpose led to ambiguity in the concept and potential misapplication of trigger warnings as remediation. Trigger warnings became widely misused. [claim] Indiscriminately used, trigger warnings participate in hysteria, the spread among a social group of an irrational fear. The concept has lost its original moorings and now holds an ambiguous purpose, confusing to students and professor alike. [reason] In a recent American Association of University Professors survey, 82% of faculty, and 67% of students admitted “significant confusion” about the use of trigger warnings. [evidence] When this degree of confusion about a “regulation” is at play, it is likely that it will be misdirected, resulting in widespread harm to so-called offenders. [warrant]

If this short argument were to be extended, we might recommend that additional reasons be included or that the writer more fully respond to contemporary advocates of trigger warnings. These extensions might make the argument more persuasive to some. But, the rudiments of a robust argument are here, mirrored in the claim, reason, evidence, warrant, and response.

Welcome to WordPress. This is your first post. Edit or delete it, then start blogging!